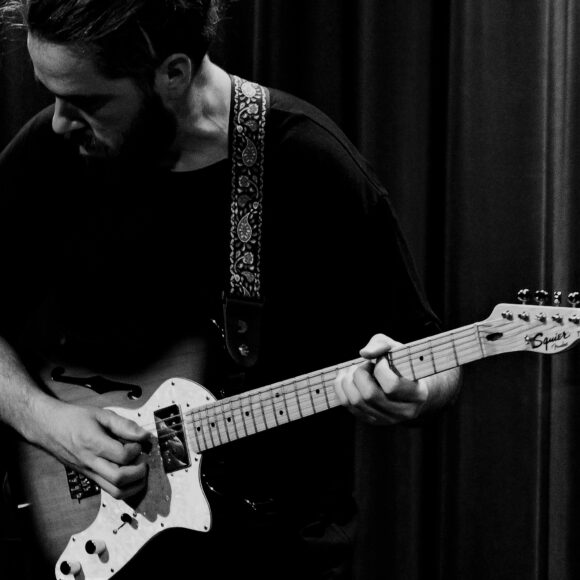 Born in Rovigo in 1988, fell in love with the electric guitar from a young age, and in the middle of a hard rock adolescence, he became passionate about research music thanks to the charismatic and inspiring guidance of Maestro Carlo De Pirro.
After graduating in clarinet at the conservatory „F.Venezze“ in Rovigo (2009), he focused his studies in the search for a poetics and a personal musical language that combines his heterogeneous musical roots, finding a way in composition and improvisation.
He graduated in composition at the Conservatory of Rovigo in 2017 in the class of Andreina Costantini and Nicola Evangelisti.
He participated in numerous masterclasses with composers as Tristan Murail, Claudio Ambrosini, Azio Corghi, Andrea Agostini, Francesco La Licata, Paolo Aralla, Sonia Bo and many others.
In 2016 he studied composition at the „Hochschule fur musik und theatre“ in Hamburg with Professor Xiaoyang Chen and free improvisation with Prof. Vlatko Kucan.
In 2012 he co-founded „Ensemble Collettivo Crisis“, (www.crisisensemble.it) an incubator of projects concerning research music and new technologies and musical languages with a specific focus on improvisation.
In 2014 he created F:A:M: artistic musical forge, an educational project where teachers of a small village music school can research and develop personalized, non-standard, maieutic and innovative methods to teach music and improve the creativity and artistic freedom of the student and create an important musical background in the operational context.
Since 2017 he has been part of the impromptu.works improvisation ensemble in Hamburg with which he has joined musicians such as Barre Phillips, Vlatko Kucan, Massimo Falascone, Jean Charles Francois, Bill Egart, Livia Kavina and many others.
He is the artistic director of „Cataclisma Improvisation Festival“, an event that brings improvised music to the province of Rovigo, his concert activity takes place mainly between Italy and Northern Europe, his compositions have been performed in Italy and abroad.
The release of the album „Live in Hamburg“ with the quartet of Ensemble Colletivo Crisis under the label Setola di Maiale is scheduled soon.