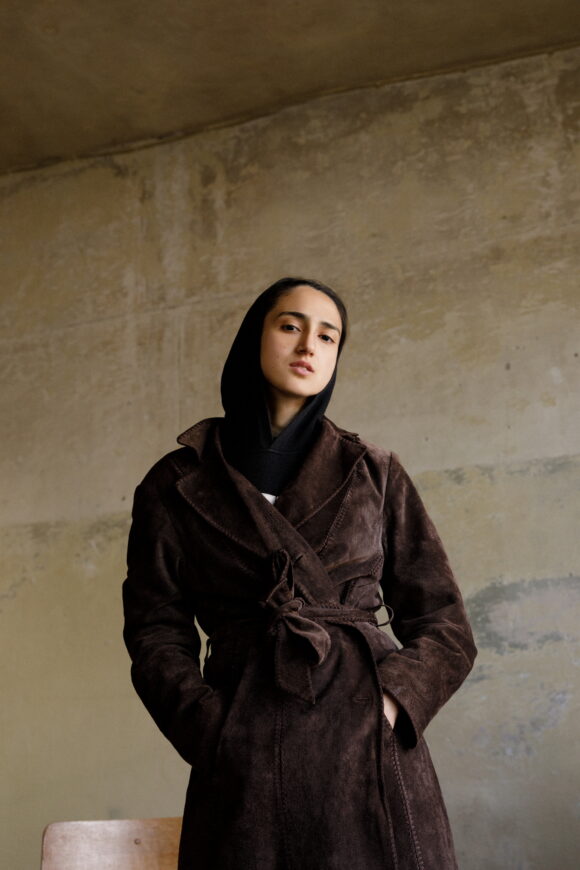 »Efia«, the sophomore album by Rosaceae, picks up where the Hamburg-based sound artist’s 2019 debut on Neoprimitive left off, further exploring the topics that had already informed »Nadia’s Escape«. From its confrontative front cover to the eight tracks on the album, »Efia« is fully dedicated to the motif of resistance, but does not exhaust itself in polemics. Rather, it masterfully translates the complexities of its underlying central themes into a visceral narrative.

»Efia« was originally conceived as a commissioned work for the 2019 edition of Hamburg’s Noisexistance festival and departed from a sentence uttered in the British 1980s TV show »Sapphire & Steel« which inspired cultural theorist Mark Fisher in his analysis of what he had coined »hauntology,« a term originally coined by the Algerian-French philosopher Jacques Derrida in the early 1990s: »There is no time here, not anymore.«

The album again showcases Rosaceae’s knack for combining abstract experimental sound art with a form of storytelling that had already been at the centre of »Nadia’s Escape« and which relies on both verbal and musical means of giving a voice to the voiceless. The disembodied voice of – amongst others – Jesseline Preach and manipulated vocal samples blend in with dense soundscapes, elements of Neue Musik and occasional pure harsh noise. It’s a mix that deliberately puts different artistic traditions into a dialogue with each other: the hallmarks of European salon culture are con- fronted with Kurdish wedding music and the unnerving loop of someone demanding a »Zugabe« (»encore«).

Thus, »Efia« not only blurs the lines between cultural and regional traditions, but also conjures up the ghosts of a past, ghosts that are more than ready to haunt the timeless present trying so hard to repress the atrocities happening at its fringes. As a whole, this makes »Efia« both a chilling work of sound art and a vibrant political statement fuelled by burning hot energy.

-»DNA« is Rosaceae’s second album for Pudel Produkte after last year’s acclaimed »Efia« for the Hamburg label. The eight tracks further explore the artist’s interest in the interplay of sound and language while also adding skittering rhythms and thumping kickdrums to the mix. »DNA« is a complex but enriching album that as a whole not only reflects ideas of resistance, solidarity and internationalism, but also how they are mediated and their meanings are shaped by different types of mediation.

Whether Rosaceae seems to mimic the sound of rapid machine gun fire, indulges in gabber-informed beats or soothing, tinkling ambient sounds: by the end of the album the sonic experience could as much provide solace as it may be understood as an elegy, it has become abundantly clear that even the most straightforward usages of certain musical elements or statements on this album are more complex than they may seem at first. Much like »Efia,« »DNA« poses uneasy questions but provides no easy answers—neither in sound nor in language.